Question of the Day~ Are we Giving Kenya Moore, Bravo, and Andy Cohen A Pass For Bullying Porsha at the RHOA Reunion?

Kenya has bullied Porsha ever since the two joined the cast.  Over the course of a couple seasons we’ve all seen that Kenya has some deep, deep, deep, deep, deep, painful emotional scars.  The woman is truly broken to the point where it’s almost painful to watch. She is clearly not stable. This isn’t something she’s even capable of hiding. The figured it’d be great for ratings and it has, but it’s also very damaging to create this safe little bubble for this sociopath to wreak havoc with no consequences.

She sunk to all new lows at the reunion show encouraged by Andy Cohen. Kenya taunted all the ladies verbally, but more-so Porsha by pointing a scepter in her face and then calling her a “Dumb Hoe” through a bullhorn, ironically after telling Andy that she never calls anyone out of their name. 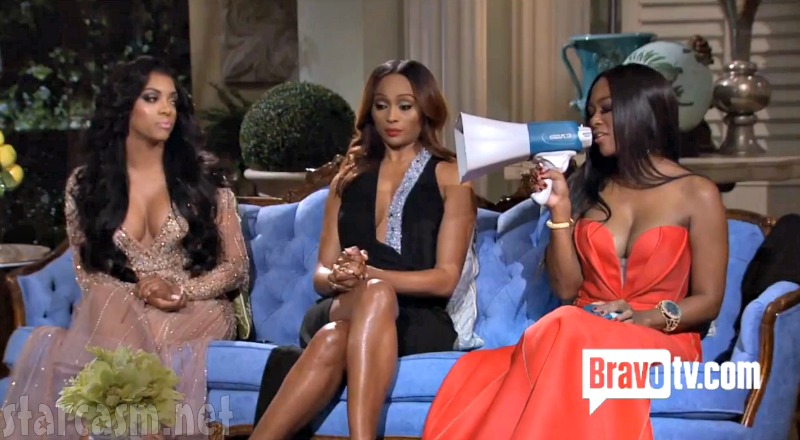 It was hard to watch Porsha breakdown on the floor after because it was an honest and unscripted display of a woman pushed to the brink emotional. “I’ve been through so much!” she cried out.  It only illustrated how she’s been chewed up and spit out by these satanic television producers and that evil, black witch Kenya!  She should really stop going around calling herself a Ms. America because she will never have that respect again. I hope whatever RHOA is paying her was worth her reputation and the respect if the black community because some things you just can’t come back from. What bothers me the most is that Kenya was just saying that someone should have “threw her a party” when she was going through a hard time.  How the ladies should always be there to encourage and support her.  She truly is a very sad and misreable woman, but this is just the type of female black representation that Jewish media loves.  Here we have a woman who just went through a public divorce and you call her a “Dumb hoe” while Andy just laughs and giggles.  That was some hard stuff to watch.

I hate to see people get run over by hypocrites and double talk, so I’ll bring it the Qmunity. Does Bravo and Andy Cohen take get off scott-free for the Bully Tactics of the Real Housewives brand?  Why does Andy ALWAYS paint himself as some sort of lovable gay when he’s as twisted, mean, and passive aggressive as the rest of the cast?  Can you tell I don’t like Andy Cohen?  And who in their right minds thinks that you can antagonize and abuse people without getting hit?